Under his abled guidance, Five (05) Ph.Ds, Twenty Five (25) M.Phils, Three (03) UGC-PDFs, and One (01) ICSSR-PDF were awarded. He has completed one Minor project on Participation of Women of Primitive Tribal Groups (PTG) in self-help groups and impact: a comparative study between Andhra Pradesh and Tamilnadu in the year 2010. He published Five (05) books and Thirty Six (36) articles in various National and International reputed Journals. He has organised Twenty Nine (29) Seminars & Conferences and also chaired the National and International Seminars and Conferences. He was also in-charge of course co-ordinator for B.Ed. (Distance Education) for 14 years.

An amount of Rs.2.5 lakhs was sanctioned for the project under Ministry of Tribal Affairs “Participation Women of Primitive Tribal Groups (PTG)” in self help groups, and Impact: A comparative study between Andhra Pradesh and Tamil Nadu in the year 2010.

Names of Ph.D. Awardees and their Research Topics

Socio-Economic Conditions of Chenchus in Kurnool District of A.P.

Self Help Groups and Empowerment of Women – A study in Chittoor (Dist.)

Use and Abuse of Drugs – A Study in Rayalaseema Region of Andhra Pradesh. 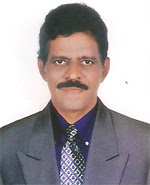