During the Ph.D work, extensive studies were carried out on Radioclimatology over Southern India for Radiowave propagation and developed a monostatic SODAR with the help of NPL, New Delhi and studied the PBL characteristics and correlated with radio propagation and fading of the signals. A similar SODAR was installed by me in Antarctica during 1990-91.

After Ph.D, studies were conducted on Atmospheric sciences using Indian MST Radar especially on turbulence parameters and gravity waves and also on mobile and Radio communications. Extensive studies on “Digital Video Broadcasting” were carried out for two years in Nanyang Technological University, Singapore during 2012-2014.

Involved in developing researchactivities in the area of Atmospheric sciences by nurturing the UGC-SVU Centre for MST Radar applications, which is now recognized as a Major National Facility at SVUniversity and an Advanced Centre for Atmospheric Sciences by ISRO. An M.Tech program on “Space Technology” was carried out with the help of ISRO.

Many students are working jointly at SVU in collaboration with NARL. The state of the art “Meteor Radar” facility was established for the first time in the Indian Universities. A Lidar & HPC facilities were also augmented to strengthen the research activities.

Published more than 150 research publications and guided 41 students for Ph.D. Several research projects were completed and many are ongoing.

Through the UGC-SVU centre, facilities were extended to user scientists from different Universities across the country. Several workshops/ winter schools were conducted to promote atmospheric sciences research. NSSS-2012 was organized successfully and 104th Indian Science Congress organized during 3-7 January 2017, witnessed the organizational capability of me as an Organizing secretary.

Message from the Chairman, Board of Studies (PG) Physics:

Curriculum is a set of Courses, that can be offer by the Department. The curriculum is the course of deeds and experiences through which students grow to become mature to be successful in the society. In fact, curriculum is the sum of all the activities, experiences and learning opportunities for which an institution or a teacher who takes responsibility.

An educational institution that provokes learning and promotes all-around education and skill enhancement will produce brilliant students and responsible citizens. A good curriculum promotes good values, virtues, and an inquisitive atmosphere to study.

The idea of curriculum development is vast but when it comes to education, personality development for students is the priority of any educational institution. A strong personality is not the one who is accompanied by people who like him/her but a persona that is physically, emotionally, and mentally independent of their thoughts and practices.

The department of Physics is most well-organized, veteran and student friendly department. The Curriculum offered by the department is one of the oldest disciplines of science dealing with the development of a number of theories that attempt to explain various forces that exist in nature. Further, the genesis of most of the Engineering Disciplines is based on various principles and theories of Physics. Hence, the subject of physics, on one side deals with the development of fundamental theories towards revealing various processes and forces in nature and on the other hand, it seamlessly interfaces with almost all disciplines of engineering wherein outcome of the research in physics can be translated into useful technologies and products thereby immensely contributing to the wellbeing of mankind.

Objective of the Program:

The major objective of the programme is to bring out professionals having knowledge of basic laws of nature together with strong fundamentals in the core area of physics viz. Classical Mechanics, Quantum Mechanics, Condensed Matter Physics, Electromagnetism, Computational Physics, Statistical Physics, Spectroscopy, Photonics, Thin film Technology and Solar Energy Physics, Electronics, Atomic and Nuclear Physics and advanced level topics such as High Energy Physics, Nanotechnology, Nonlinear Optics, etc. Further objective of the program is to inculcate certain specific enabling skill sets to prepare the students to take up challenges in any one or more functional domains viz. (i) Academics; (ii) Basic and Applied Research; (iii) Research & Development; (iv) Engineering & Technology and (v) Industry. 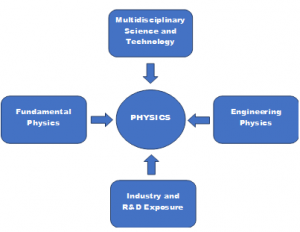 Members of the Board of Studies

Selected list of Publications for the last five years: 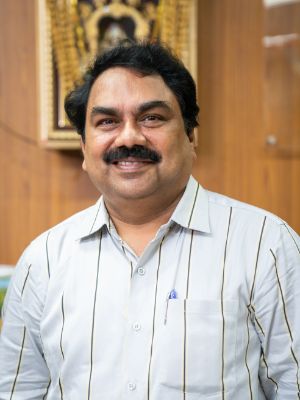